THE SUN IS ALSO A STAR 2019 Movie Trailer 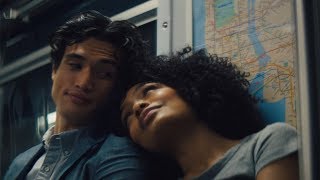 College-bound romantic Daniel Bae and Jamaica-born pragmatist Natasha Kingsley meetâ€”and fall for each otherâ€”over one magical day amidst the fervor and flurry of New York City. Sparks immediately fly between these two strangers, who might never have met had fate not given them a little push. But will fate be enough to take these teens from star-crossed to lucky in love? With just hours left on the clock in what looks to be her last day in the U.S., Natasha is fighting against her familyâ€™s deportation as fiercely as sheâ€™s fighting her budding feelings for Daniel, who is working just as hard to convince her they are destined to be together.

A modern-day story about finding love against all odds, â€œThe Sun Is Also a Starâ€ explores whether our lives are determined by fate or the random events of the universe.

Directed by Ry Russo-Young (Before I Fall), the film is based on the acclaimed bestseller by Everything, Everything author Nicola Yoon. The Sun Is Also a Star was #1 on the New York Times bestseller list and has received multiple accolades, including: 2016 National Book Award Finalist; Amazonâ€™s Best Book of 2016 in YA; Amazonâ€™s Top 20 Childrenâ€™s Books of 2016 in YA; the New York Times Notable Childrenâ€™s Books of 2016; and Entertainment Weeklyâ€™s 10 Best Books of 2016.

Russo-Young directed from a screenplay by Tracy Oliver (Girls Trip). The filmâ€™s producers are Leslie Morgenstein and Elysa Koplovitz Dutton, who served as producers on â€œEverything, Everything. Pamela Hirsch served as executive producer.

This film has been rated PG-13 for some suggestive content and language.