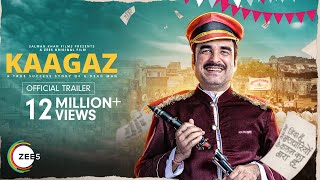 Presenting the trailer of Kaagaz, a satirical comedy produced by Salman Khan and directed by Satish Kaushik.

The story revolves around a common man, played by Pankaj Tripathi, who is declared dead as per the government records and who struggles to prove his existence.