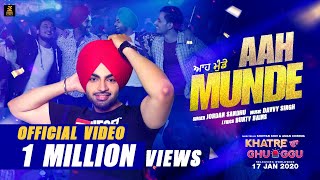 The story of this film revolves around ‘Fateh’ (played by Jordan Sandhu) who works as a RJ to earn money and fulfill his childhood dream of becoming a singer. From his huge fan following, he meets ‘Meet’ (played by Diljott) who falls in love with him. They both get attracted to each other and fall in love. But as always this path is not so easy. The girl’s father ‘Kanwar Mahinder Singh’ (played by the talented comedian B. N. Sharma), who works for the Punjab Electricity Board, is already unhappy with his family, office workers and his whole life. He is a very superstitious person which causes laughter and fun. With many ups and downs because of a gangster, an astrologer, a hypocrite and various circumstances, story proceeds in a comic and interesting way. Will the Meet get his love, will Fateh become a singer, will enthusiasm come back in her Kanwar Mahinder Singh’s life? All these questions are answered in an entertaining way in the film â€˜Khatre Da Ghugguâ€™.